The Falcon Throne by Karen Miller

The Falcon Throne
The Tarnished Crown Book One
By Karen Miller 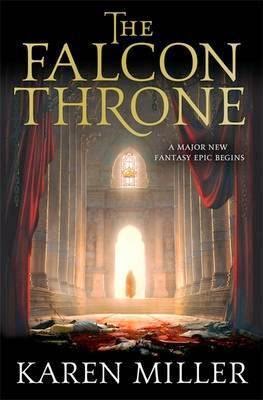 Nobody is innocent. Every crown is tarnished.

A royal child, believed dead, sets his eyes on regaining his father s stolen throne. A bastard lord, uprising against his tyrant cousin, sheds more blood than he bargained for. A duke s widow, defending her daughter, defies the ambitious lord who d control them both. And two brothers, divided by ambition, will learn the true meaning of treachery.

All of this will come to pass, and the only certainty is that nothing will remain as it once was.

As royal houses rise and fall, empires are reborn and friends become enemies, it becomes clear that much will be demanded of those who follow the path to power.

Steeped with history and a vibrant sense of setting The Falcon Throne straddles the duchies of Harcia and Clemen. Once a unified Kingdom it is now a shadow of its former glory as warring dukes have ridden the land to the brink of ruin. In the midst of an uneasy peace we begin tale of Roric who overthrows his cousin to take the throne of Clemen for the good the people; and Balfre, heir to Harcia who will go to any lengths to assume absolute power and resurrect a kingdom centuries dead.

Amidst the tension that leads to war The Falcon Throne also tells the tale of the orphaned son of the murdered duke, the rightful heir to Clemen, who is nurtured on tales of the bastard cousin who killed his father and stole his crown. A crown it is his destiny to reclaim.

Miller has stretched her wings with this book and soared high to bring us a tale worthy of any fan of Martin’s A Game of Thrones, Rothfuss’ The Name of the Wind or Lynch’s The Lies of Locke Lamora.

Filled with passion and vigor The Falcon Throne is an epic historical fantasy of kingdoms and dynasties, princes and pawns, and a shadowy power who pulls strings behind the scenes to topple one empire and raise another. I highly recommend it!

The Falcon Throne is due for release on August 26th – preorder it now!