Pillars of Sand: A Review 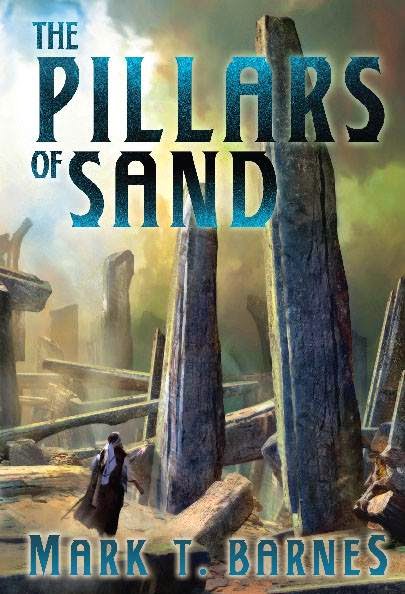 The Pillars of Sand
Echoes of Empire
By Mark T. Barnes
BUY IT

Prophecy declared that corrupt politician Corajidin would rule the Shrīanese Federation, even become its new Emperor—and sinister magic has helped him defy death in order to do it. But his victory is not assured, thanks to clashing rival factions that hinder any attempts to unify the nation. Though he has taken increasingly brutal measures to eliminate all obstacles in his path, the dark forces supporting him grow dangerously impatient. And the harder they press, the more drastic Corajidin’s actions become.

Soon, only his most powerful adversaries will stand in his way: Indris, the peerless swordsman and sorcerer who has long fought to end the Federation’s bloody turmoil; and the warrior-poet Mari, Corajidin’s own daughter and the woman Indris loves. Fate has torn them apart, forcing them into terrifying personal trials. But if Indris can bring to bear the devastating knowledge of the Pillars of Sand, and Mari can rise up as a rebel leader, Corajidin’s enemies will rally—and the decisive battle for the soul and future of the Shrīanese will begin.

When I get to the last book of a series I am passionate about, I always have mixed feelings. I am jubilant to get my hands on the new volume, and sad because it’s the last.

We have come now to the end of the Echoes of Empire, the debut trilogy from wunderkind Aussie Mark T. Barnes.

You have no idea how much I want more. Ia, the world in which Barnes’ epic saga plays out, is immense. While many genre authors are talented world builders, Barnes, who may well stand on the shoulders of giants has become, to my mind, a giant himself. The world of Ia lives and breathes. It is rendered in vivid technicolor and wonders and horrors lurk at every turn. I am so enraptured that I just want to pry Barnes brain apart and scoop out everything he’s ever thought about it… or maybe just steal his notes (hello, coffee table encyclopedia with full colour illustrations please!). For me it is a joy to read and to spend time in such a wonderfully and lovingly crafted creation. You can tell Barnes takes this seriously, that he isn’t happy to settle with a ripped off medieval Europe on which to stage his tales. And when/if he does borrow from our past it is reinterpreted with stunning vision and imagination. The sheer number of details that are thrown ‘haphazardly’ (they really aren’t haphazard) are mind-boggling.

Yeah, yeah I know. I am gushing.

You want me to tell you about the story? Pfft. Go and buy it!

In The Pillars of Sand the various threads of books one and two come to head, revelations abound and battles ensue. There are many kickass fight scenes – Mari is amazing – and Indris… well he finally has to embrace the power that is his birthright and finds out exactly what that birthright is. Squeeeeeeeeeeeeee! It is so worth the wait.

The worst part however is that the book ends.

And knowing that Barnes has another 6 books plotted to continue the next arc in Indris’ journey is torture. But that’s not all he has planned so… it’s now a waiting game.

Don’t read these books expecting Barnes to hold your hand through the telling. We hit the ground running in The Garden of Stones and it’s up you the reader to pay attention to the details that are presented to get your bearings. Anyone who has read Erikson will have no problem, and those who loves epic fantasy – of the truly epic, complex and stunningly crafted kind – then you will love this and, I think, anything else Barnes cares to write.

PrevPreviousPrince of Fools: A Review
NextBound by Alan Baxter: A ReviewNext