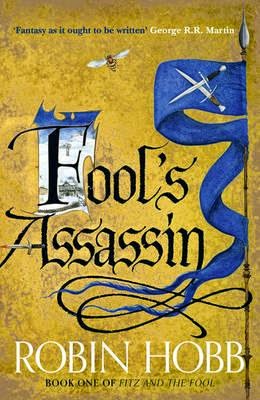 Tom Badgerlock has been living peaceably in the manor house at Withywoods with his beloved wife Molly these many years, the estate a reward to his family for loyal service to the crown.

But behind the facade of respectable middle-age lies a turbulent and violent past. For Tom Badgerlock is actually FitzChivalry Farseer, bastard scion of the Farseer line, convicted user of Beast-magic, and assassin. A man who has risked much for his king and lost more…

On a shelf in his den sits a triptych carved in memory stone of a man, a wolf and a fool. Once, these three were inseparable friends: Fitz, Nighteyes and the Fool. But one is long dead, and one long-missing.

Then one Winterfest night a messenger arrives to seek out Fitz, but mysteriously disappears, leaving nothing but a blood-trail.

What was the message? Who was the sender? And what has happened to the messenger?

Suddenly Fitz’s violent old life erupts into the peace of his new world, and nothing and no one is safe.

A decade or so has passed in the Kingdom of the Six Duchies and FitzChivalry Farseer, bastard son of the royal line and former king’s assassin, has taken on a new identity away from court intrigue with his wife Molly.

As Tom Badgerlock, he has little need of his Skill magic or, with the passing of his wolf companion, that of his Wit. That is until a mysterious messenger arrives, only to disappear before she can deliver her message, leaving a trail of blood.

Given how long it’s been since the last Fitz and the Fool book, Hobb’s leisurely introduction back into this world is welcome. Not only does the telling of the story remain true to the pacing of previous nine volumes (that are collectively referred to as the books of The Realm of the Elderlings), it works as a smoldering fire that slowly has new fuel added to it until it is suddenly a roaring blaze again.

The story is deceptively simple yet complex. Hobb’s connection to the character of Fitz is evident, it feels like the last ten years between the books have never happened, that it was only yesterday we last saw the world through Fitz’s eyes and while things have changed as they are wont to do, they are still comfortingly familiar.

This book is filled with heartache and joy, tension and foreboding, and anyone who fell in love with FitzChivalry Farseer in the Assassin’s Apprentice will fall in love with him all over again. The highs and the lows are achingly crafted and so very real it is hard to imagine that Withywoods, the Six Duchies and indeed Fitz himself, do not actually exist somewhere.

This book is one of the best of the year. It is Hobb at her best and I came to the end all too soon. The books of Fitz and the Fool – all of them – are pieces of a masterpiece and one of the most important works in modern speculative fiction.

Thankfully Hobb is not a writer to take years to complete a book so hopefully we will have the next volume sooner rather than later.