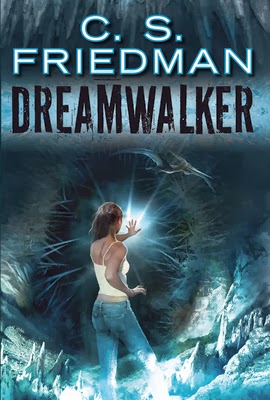 All her life Jessica Drake has dreamed of other worlds, some of them similar to her own, others disturbingly alien.

She never shares the details with anyone, save her younger brother Tommy, a compulsive gamer who incorporates some aspects of Jessica’s dreams into his games. But now someone is asking about those dreams…and about her. A strange woman has been watching her house. A visitor to her school attempts to take possession of her dream-inspired artwork.

As she begins to search for answers it becomes clear that whoever is watching her does not want her to learn the truth. One night her house catches on fire, and when the smoke clears she discovers that her brother has been kidnapped. She must figure out what is going on, and quickly, if she and her family are to be safe.

C.S. Friedman is one of my favourite authors. A vivid world-builder, she has the knack for reaching into the dark heart of humanity, pushing past the thin layer of the mundane and exposing the fantastic beneath. And making those things that raise the hairs on the back of your neck seem very real.

This is Friedman’s first urban fantasy, she has written both epic fantasy and science fiction previously, and it is utterly compelling. It stands with one foot in our world and the other in one totally different. But that’s one of the joys of speculative fiction right? It is also her first foray into that ever shifting plane that is ‘Young Adult’.

But don’t let that put you off, if indeed it does. Dreamwalker is still very much a Friedman book with all the intricate plotting and precise pacing, well-developed characters, and the fantastic prose. And naturally, as it’s Friedman novel it’s more mature, more serious, and a bit darker than many YA novels you are going to come across.

It is also amazing and going in my ‘keepers’ bookshelf alongside all her other work.