The Lascar’s Dagger: A Review 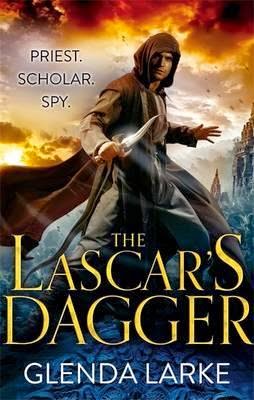 FAITH WILL NOT SAVE HIM.

Saker looks like a simple priest, but in truth he’s a spy for the head of his faith. It’s a dangerous job, and more lives than merely his own depend on his secrecy.

When Saker is wounded by a Lascar sailor’s blade, the weapon seems to follow him home. Unable to discard it, nor the sense of responsibility that comes with it, Saker can only follow its lead.

It will put him on a journey to strange shores, on a path that will reveal terrible secrets about the empire, about the people he serves, and likely lead to his own destruction.

For those of you who have been patiently waiting for a new novel from Glenda Larke your wait is finally over.

Set in a fantasy world that is more akin to the 17th Century in technology and feel than more usual medieval, Larke weaves a cunning tale of religion and the machinations of empire, as great trading fleets discover and exploit new lands.

An absolute master of world building Larke combines the greed for riches to be found in a burgeoning spice trade with native magics and the politcs of religions at war. She has the gift of George R.R. Martin to create an immense world through throw-away lines and character histories that just grows in the background until you are living and breathing a while new world as though you were actually there.

With astounding ease Larke weaves plots twist and turn, and driving tension abounds as characters leap off the page. Glenda Larke is master storyteller. If you have never read her before then you have a load of great books to get through and this is a very good place to start.

PrevPreviousSkin Game – a cover
NextThe Boy with the Porcelain Blade: A ReviewNext