The Iron Wyrm Affair – A Review 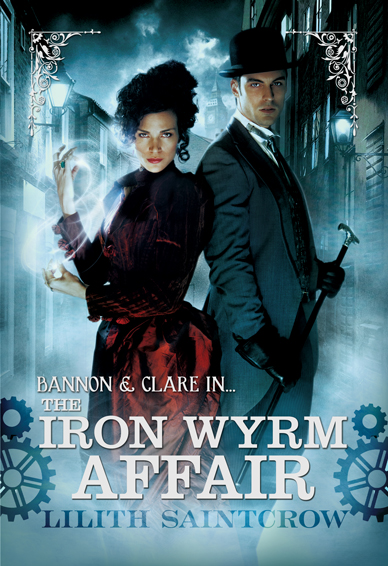 For Queen, for country, for staying alive . . .

The game is afoot!

London’s geniuses are being picked off by a vicious killer, and Emma Bannon, a sorceress in the service of the Empire, must protect the next target, Archibald Clare. Unfortunately he’s more interested in solving the mystery of the murders than staying alive . . .

The Iron Wyrm Affair is a brilliant alternate history, told in such a way that it reads like one of Guy Ritchie’s Sherlock Holmes movies dropped into the middle of a steampunk fantasy with a side of science fiction. Saintcrow opens with the uneasy introduction of Archibald Clare and Emma Bannon (they are the Bannon & Clare of the series name) and then proceeds to throw the reader head first in a magnificent romp of a detective story and with aspirations of epic fantasy  – aspirations it lives up to.

I was hesitant at first as I am not a big fan of Victorian era settings, but Saintcrow does a masterful job of taking the best parts of Victoriana and melding them in a pot of great world building that firmly shifts this tale into its own dimension (we’re not in Kansas anymore Toto). A world where Sorcerers rank above the aristocracy, mentaths are registered servants of the crown and so much back story is hinted at – and approached in a sideways manner – that it had me bursting at the seams for more.

Saintcrow is another one of these authors who seems to have mastered a more ‘economic’ approach to the telling of brilliant fantasy tales in a market that is known for its door-stop sized epics. This is good and bad. You get to the meat of the story faster, and Saintcrow’s writing is smart. She gives you enough without falling into the trap of info-dumping; but what she hints at is what I want more of. I want to know more about the Dragons and the Age of Flame, I want to know more about the sentient and deadly Gryphon’s that serve Britannia – which is both the name of the Empire and an ancient Spirit who inhabits the mortal coil of her avatar (the King or Queen – in the case of this book Queen Victrix [get it?]).

Saintcrow also does a superb job of bringing the city of London to life with her clockwork Altereds, the Black Warks ruled by Mehitabel and the Tower, haunted by the Shadow to name a few.Then she brings it all together in Technicolor with characters that burst from the page.  Emma Bannon, Sorceress Prime, has an intriguing back story and behaves in a most unlady-like fashion to fulfill her duty as a servant to the crown; while Archibald Clare,  a cross between Sherlock Holmes and Encyclopedia Brown, has more knowledge than sense and over powering curiosity to know which get him in all sorts of bother.

Lilith Saintcrow’s jaunt into steampunk thrusts the reader into a Hatter’s vision of Victorian England flooded with magic and mayhem; where clockwork horses draw hansom’s along cobbled streets, the very presence of a Dragon can twist the fabric of reality, and sorcery and deductive reasoning (of a brain with intel like processing power) are all that stands between a deadly conspiracy and the survival of the Empire.

I can’t wait to see what Bannon & Clare tackle next.