The Steerswoman’s Road
By Rosemary Kirstein
BUY IT 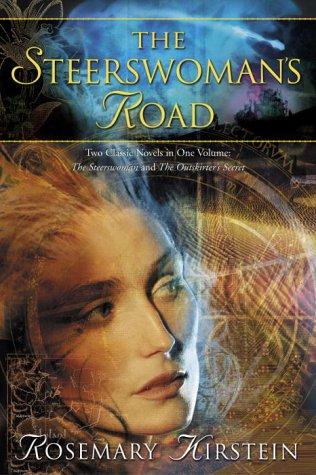 When the steerswoman Rowan discovers a small, lovely blue jewel of obviously magical origin, her innocent questions lead to secret after startling secret, each more dangerous than the last—and suddenly Rowan must flee or fight for her life. Or worse, she must lie.
With every wizard in the world searching for her, Rowan finds unexpected assistance. A chance-met traveler turned friend, Bel is a warrior-poet, an Outskirter, and a member of a barbaric and violent people. Or, so it would seem.

For Bel, unknowing, possesses secrets of her own: secrets embedded in her culture, in her people, in the very soil of her homeland. From the Inland Sea to the deadly Outskirts, surrounded by danger and deceit, Rowan and Bel uncover more and more of the wizards’ hidden knowledge. As the new truths accumulate, they edge closer to the single truth that lies at the center, the most unexpected secret of them all. . . .

If you ask a Steerswoman (and some Steersmen) a question, any question, she will answer. If a Steerswoman asks you a question, any question, you must reply. A Steerswoman will speak only the truth to you (provided she knows the truth) and you must do the same for her. If you refuse to answer her question, you will be placed under the Steerswomen’s Ban and no Steerswoman will answer your questions – ever. So for centuries, the Steerswomen – questioning, searching, investigating – have slowly learned more and more about the world through which they wander, the Inner Lands. All the knowledge that the Steerswomen possess is given freely to those who ask and they have assisted mankind’s expansion through the land, pushing their boundaries – physical and mental – ever outward.
This is an interesting world and the reader would be easily forgiven for assuming it was medieval. I did. But as the story unfolds, it turns out that the Inner Lands are far more than they seem. I find myself pausing here, wondering just how much I can say without venturing into the dreaded realm of the spoiler. It’s not so much that I’m worried about giving away huge twists in the plot, but rather that I don’t want to spoil Kirstein’s wonderful way with the slow reveal. One thing this book is not is high fantasy. From the blurb on the back, you may think so, but no it’s not. This by no mean detracts from the story. In fact, when it took such a dramatic turn from what I was expecting, I was too caught up in the tales unfolding to care.
Let me explain. You see, Steerswomen are not the only holders of knowledge. Other men and women (called wizards by the people) hold sway over a knowledge that gives them miraculous powers. Called magic, the wizards won’t share their knowledge. For centuries, they have been under the Steerswomen’s Ban for refusing to answer the Steerswomen’s questions. So when the Steerswoman Rowan begins to search for the origin of a small blue jewel that hints at the magical, her questions spark a chain of events that see the wizards of the Inner Lands seeking her death. The precise sets of questions and formulae used by Steerswomen to draw the truth out of story and observation are part of what made this book so appealing to me. Moving through a world with no means of instant communication, Steerswomen rely on highly trained powers of deduction, matched with a broad education in basic science and the principles of logic.
Part adventure, part detective story, this book is a fantastic read that actually kept me up till the wee hours. Kirstein displays a great sense of plotting, vivid characterisation and sets her tale to explore contemporary themes.
Hurry up with the rest of the series Ms Kirstein – please!

PrevPreviousReview: To Ride Hell’s Chasm
NextReview: The Mark of RanNext