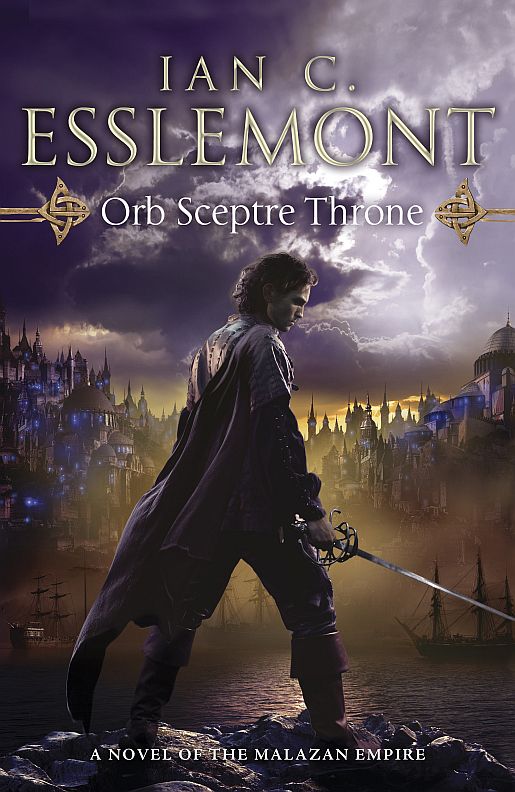 Darujhistan, city of dreams, city of blue flames, is peaceful at last; its citizens free to return to politicking, bickering, trading and, above all, enjoying the good things in life. Yet there are those who will not allow the past to remain buried. A scholar digging in the plains stumbles across an ancient sealed vault. The merchant Humble Measure schemes to drive out the remaining Malazan invaders. And the surviving agents of a long-lost power are stirring, for they sense change and so, opportunity. While, as ever at the centre of everything, a thief in a red waistcoat and of rotund proportions walks the streets, juggling in one hand custard pastries, and in the other the fate of the city itself.

Far to the south, fragments of the titanic Moon’s Spawn have crashed into the Rivan Sea creating a series of isles…and a fortune hunter’s dream. A Malazan veteran calling himself ‘Red’ ventures out to try his luck-and perhaps say goodbye to old friends. But there he finds far more than he’d bargained for as the rush to claim the Spawn’s treasures descends into a mad scramble of chaos and bloodshed. For powers from across the world have gathered here, searching for the legendary Throne of Night. The impact of these events are far reaching, it seems. On an unremarkable island off the coast of Genabackis, a people who had turned their backs upon all such strivings now lift their masked faces towards the mainland and recall the ancient prophesy of a return.

And what about the ex-Claw of the Malazan Empire who now walks the uttermost edge of creation? Her mission-the success or failure of which the Queen of Dreams saw long ago-is destined to shape far more than anyone could have ever imagined.

I’ve been a Malazan fan since The Gardens of the Moon came out way back when. Unfortunately as the story progressed I became more annoyed with Erikson’s changing style, thought I read all the books to the end. One of the things that did keep me going was the world he had built with Ian Cameron Esslemont. This universe is amazingly rich in mysticism, religion, philosophy and culture. A true gem in a genre stuck in rehashing of pseudo-medieval England. So when I discovered that Esslemont was going to be writing novels set in the same world alongside Erikson’s own I was excited.

And happily having now finished his third work in the world, I still am.

As with most epic fantasy these days, Orb Sceptre Throne follows a handful of different character perspectives over three main storylines with regulars and new characters scattered around them. Now even if you haven’t read Erikson’s Malazan books you can read this as the story does – for the most part – stand on its own legs. Some back ground in the other Malazan books would add to your reading experience but it is not strictly speaking (writing) necessary.  And in stark contrast to Erikson’s own latter work Esslemont’s own prose is much more easily accessible to readers yet still retains the unmistakable feel of the Malazan world.

Another point in Esslemont’s favor is that from the start the plot picks up building and old favorites from Darujhistan show their faces, and Ascendants appear. Moving through this book is effortless and twists and turns delight while everything continues to build a favorite fantasy universe. And you just know it’s all heading to something. Just like the Malazan books.

I adore this world. It’s at once both gritty and full of wonder. Both Esslemont and Erikson do a fine job, and while I haven’t tried Erikson’s new Forge of Darkness yet, for the moment Esslemont has pulled ahead in terms of readability for me.

I already have the next book – but I will pace myself. I don’t want to overdo it 😉