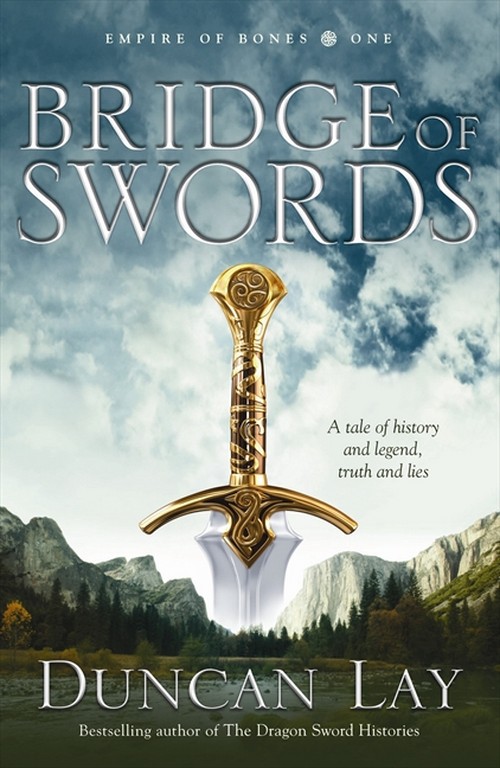 A tale of history and legend, myth and belief, truth and lies …but at its heart is a story of fathers and children and what is passed from one generation to another.

Long ago, a group of men became the Elfarans, altered by magic to resemble the elves of the great sagas. An internal dispute caused a number of Elfarans to leave their home on Dragonara Isle and found a new homeland on a new continent. Their descendants have come to believe they are real elves and superior to mere humans who have no magic abilities and they have sealed themselves away from any contact with anyone else.

Taking advantage of my new position at Booktopia I am doing my best to get more genre author’s exposure to over there. Not that they ignore genre authors. Not at all. But – I live and breathe it so…

Anyway I hit up Duncan Lay to answer our Ten Terrifying Questions:

1) To begin with why don’t you tell us a little bit about yourself – where were you born? Raised? Schooled?

I was born in London, England and raised in East Sussex (home of David Gemmell) before moving here with my family when I was 16 and have lived in Sydney or the Central Coast ever since.

2) What did you want to be when you were twelve, eighteen and thirty? And why?

I wanted to be a writer when I was eight, when I was 12, 18 and 30. For as long as I can remember I have loved stories, writing them, creating and telling them. It has always been part of me and I dreamed of doing nothing else.

3) What strongly held belief did you have at eighteen that you do not have now?

At 18 I believed all I had to do was scribble down my thoughts on paper and publishers would fall all over themselves to put it into print and hail my genius. It took me nearly another 20 years to become published and I learned many lessons about writing along the way. I now know it is a craft that must be worked at and books do not just spring from my mind, via the fingers, into pages but must be carved, created and nurtured to grow to their full life.

4) What were three works of art – book or painting or piece of music, etc – you can now say, had a great effect on you and influenced your own development as a writer?

Star Wars was the first movie I ever saw at the cinema and literally blew my mind. At age seven, I can honestly say it got my imagination working and it has not stopped since.

Legend, by David Gemmell, showed me fantasy does not have to be all singing elves and dancing dwarves and good and evil defined in black and white but can be endless shades of grey.

It’s relatively unknown but The Reason, by Hoobastank, had a set of lyrics that really spoke to me, particularly when I was writing my first book, The Wounded Guardian. Now I have a variety of playlists that I listen to as I write, depending on the scenes I am working on. The likes of Coldplay for more thoughtful scenes – something like AC/DC’s Thunderstruck for a battle.

5) Considering the innumerable artistic avenues open to you, why did you choose to write a novel?

If you had ever heard me sing, you’d know why! I used to do some amateur theatre and once had a part requiring me to sing. After a month of training, I was improving as my teacher was only using cotton wool in the ear closest to me. Sadly I cannot carry a tune in a bucket and that script was quickly changed.

6) Please tell us about your latest novel…What do you hope people take away with them after reading your work?

The Dragon Sword Histories was, at its heart, about a man in a dark place, coming back from that through the love of a small child. One of the themes it explored was how children can alter our view of the world and how their innocence can change the loss and regret adults carry.

For the Empire Of Bones, I wanted to explore this from the other side – how fathers can affect children and how so many of us seek to either live up to or grow away from the way we were raised.

It starts with a warrior on the run. Sendatsu has unwittingly uncovered the answer to a 300-year-old mystery and is being hunted by his own people while frantically trying to get back to his children. Just when he thinks things cannot get any worse, he runs into a pair of fellow fugitives who want to use him as their hero in their land’s fight for freedom: a young bard called Huw, who has abandoned every principle he once held dear but along the way has learned a terrible secret about an evil King and a young dancer called Rhiannon, who only ever wanted to perform but has a hidden power that is going to change everything …

7) What do you hope people take away with them after reading your work?

I hope people have been entertained by reading Bridge Of Swords, first and foremost. If they find something in there that makes them think about themselves, their place in the world and their relationships with their parents and their children, then that is even better.

8) Whom do you most admire in the realm of writing and why?

I admire Terry Pratchett for the way he takes modern situations and dilemmas and turns it into stunning fantasy novels. I also love the way he combines comedy, truth and tragedy to great effect. As a writer and journalist his book The Truth combines brilliant plot, comedy and realism in a fantasy setting. I don’t think anyone could do better.

9) Many artists set themselves very ambitious goals. What are yours?

I would like to become a full-time writer. For an Australian fantasy author with a family and a hungry bank mortgage to support, that is a lofty dream. But The Radiant Child was an Australian bestseller, so if my new series, beginning with Bridge Of Swords, builds on that then who knows …?

10) What advice do you give aspiring writers?

Write. Write some more and then write again. Malcolm Gladwell’s 10,000 Hour Rule states you need to do something for 10,000 hours before you become an expert. I’ve lost count of the number of hours I spent writing but I definitely agree that the more you write, the better you become. I’ve written a n
umber of books that were unpublishable but each one took me closer to my eventual goal. There are those like Christopher Paolini who become bestsellers as teenagers but they are the exception, not the rule. Writing is a craft. Work at it.