You are here:
Vignette 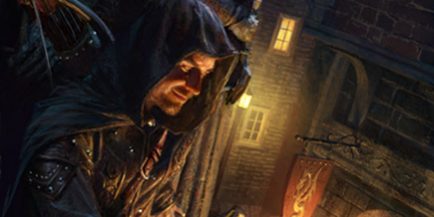 Torbal crouched in the shadows and watched the guards on the street below. He couldn’t help but smirk as the fat one scratched his head.

The one in the middle, the leader he presumed, was unable to hide his displeasure at finding the street they’d chased him into empty.

But it wouldn’t do to gloat, that way lay hubris and tempted the Fates. He wiped the smirk from his face and kept one eye on the tall, slim fellow who held the lantern high and peered into the shadows.

Torbal made it a point to wear clothing that would reflect no light when he went on a job, but you could never be too careful. He wasn’t getting any further up this building with those guards directly below, and he did not need the lantern-bearer to see the glint of light on a buckle or a dagger hilt.

He shifted back a little further against the statue of some forgotten knight and settled in to wait. The night had been going so well until Sioned had decided to move in on his mark. He hadn’t even known she was back in the city! She was obviously keeping better tabs on his movements however.

Just as he’d been about to open the windows into the second-floor bedroom of the Latrelle Estate, they had been flung open, and she’d lent out, smiled down at him—with a beauty so lovely it still had the power to take his breath away— and then screamed.

He’d slid back down the rope, and dashed across the dark garden and over the wall. But the grandees who lived on Sovereign Hill paid well to ensure that the city watch frequently patrolled the streets around their gold-filled abodes.

Well, he wasn’t finished with the Latrelle’s, they were the wealthiest mark in town, and he was going to have them.

As for Sioned; he’d have her too. One way or another.

A Knight of the Emerald Flame
24 September 2019